RMIT University researchers have developed a nano-enhanced material that can capture an incredible 99% of light and convert it to power chemical reactions.

As well as reducing the environmental impact of chemical manufacturing, the innovation could one day be used to deliver technologies like better infrared cameras and solar-powered water desalination.

Published today in ACS Applied Energy Materials, the research addresses the challenge of finding alternative energy sources for chemical manufacturing, which accounts for about 10% of global energy consumption and 7% of industrial greenhouse gas emissions.

In the US, chemical manufacturing uses more energy than any other industry, accounting for 28% of industrial energy consumption in 2017.

While photo catalysis – the use of light to drive chemical reactions – is growing in the industry, efficiency and cost remain significant obstacles to wider take-up.

“But one of the big challenges in moving to a more sustainable future is that many of the materials that are best for sparking chemical reactions are not responsive enough to light.”

“The photo catalyst we’ve developed can catch 99% of light across the spectrum, and 100% of specific colours.

“It’s scaleable and efficient technology that opens new opportunities for the use of solar power – moving from electricity generation to directly converting solar energy into valuable chemicals.”

The research focused on palladium, an element that’s excellent at producing chemical reactions but usually not very light responsive.

By manipulating the optical properties of palladium nanoparticles, the researchers were able to make the material more sensitive to light.

While palladium is rare and expensive, the technique requires just a miniscule amount – 4 nanometres of nano-enhanced palladium is enough to absorb 99% of light and achieve a chemical reaction. An average human hair, for comparison, is 100,000 nanometres thick. 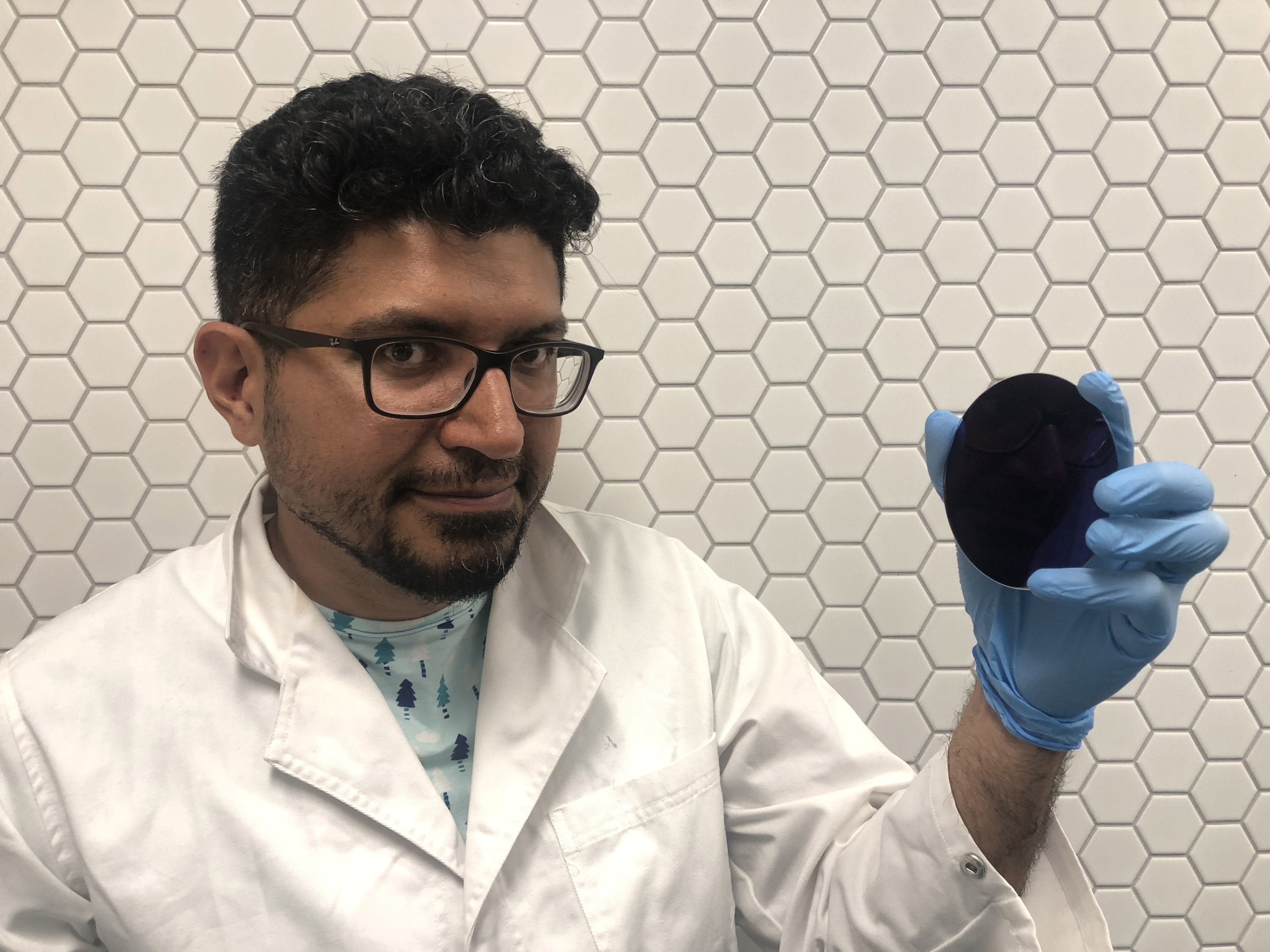 Beyond chemical manufacturing, the innovation could be further developed for a range of other potential applications including better night vision technology by producing more light-sensitive and clearer images.

Another potential use is for desalination. The nano-enhanced material could be put in salty water then exposed to sunlight, producing enough energy to boil and evaporate the water, separating it from the salt.

Gomez, who leads the Polaritonics Lab at RMIT, said the new technology could significantly increase the yield in the emerging photo-catalysis sector, with leading firms currently producing about 30kg of product each day using light as the driving force.

“We all rely on products of the chemical manufacturing industry – from plastics and medicines, to fertilisers and the materials that produce the colours on digital screens,” he said.

“But much like the rest of our economy, it’s an industry currently fuelled by carbon.

“Our ultimate goal is to use this technology to harness sunlight efficiently and convert solar energy into chemicals, with the aim of transforming this vital industry into one that’s renewable and sustainable.”

The research, with collaborators from CSIRO, the Melbourne Centre for Nanofabrication and University of Melbourne, is published in ACS Applied Energy Materials (DOI: 10.1021/acsaem.8b01704).

A paper demonstrating similar technology using gold nanoparticles will be published in a forthcoming edition of the journal ACS Photonics.

This article was originally published by RMIT.

“In order to continue the transition to a renewable energy based economy, we need to keep reducing the cost of solar energy, and the best way to do that is to increase the efficiency of solar cells,” Dr Shen said.

“If we can have a cheap source of energy that is also clean – who wouldn’t want to use it?”

ANU engineers, in collaboration with researchers from the California Institute of Technology, have developed a way to combine silicon with another material (known as perovskite), to more efficiently convert sunlight into electricity.

The key is the way the materials are joined together to form what’s known as a ‘tandem solar cell’ – essentially one solar cell on top of another. The ANU researchers say theirs is one of the simplest ever developed.

“We have constructed a tandem structure that is unconventional. When engineers combine two cells they usually need to have an interlayer to allow electrical charge to be transferred easily between the two cells, so they can work together,” Dr Shen said.

According to co-author Dr Daniel Jacobs, this is a bit like making a club sandwich with extra bread in the middle – it plays a structural role, but the sandwich would taste better without it.

“We’ve found a new way to simply stack the two cells together so they’ll work efficiently with each other – we don’t need the interlayer, or extra bread, anymore,” Dr Jacobs said.

The tandem solar cell technology minimises energy waste and simplifies the structure, hopefully making it cheaper and easier to produce.

“With tandems it’s crucial to demonstrate a fabrication process that is as simple as possible, otherwise the additional complexity is not worthwhile from a cost perspective”, Dr Jacobs said.

“Our structure involves one less fabrication step, and has benefits for performance too.”

Dr Jacobs says while it can be difficult to combine two materials in a tandem solar cell arrangement, once you get it right the efficiency goes up very quickly, well beyond what is possible with silicon by itself.

“We’ve already reached 24 per cent improvement in efficiency with this new structure, and there’s plenty of room left to grow that figure.”

This study was funded by an Australian Renewable Energy Agency (ARENA) grant, as part of a project in collaboration with UNSW and Monash University.

The research paper is available online.

This article was originally published by the ANU.

Microgrids are independently managed, locally-generated energy grids that allow communities to supply and manage their own power supply.

A prime example of a microgrid is WA’s Alkimos Beach project, which will use lithium-ion batteries and rooftop solar to power a new housing development.

“Microgrids are becoming more of a reality than ever before, and not only for remote communities, but also on an urban and utility scale,” Curtin University’s Professor Arindam Ghosh says.

“They’re reliable, energy-diverse and environmentally friendly, and these advantages are driving microgrid research and development.”

Because urban microgrids can connect or disconnect from the main grid as required, they can also provide backup when the main grid goes down, Ghosh says.

For example, when Japan’s 2011 tsunami knocked out Sendai City’s power grid for weeks, the microgrid at its local university didn’t blink, using fuel cells, solar panels and natural gas turbines to power its way through the entire disaster.

But any grid can be knocked out when demand exceeds supply.

“The main problem with microgrids is that you have limited resources,” Ghosh says.

“You might not have sufficient backup to cope with peak energy loads, which means there’s the possibility that your grid will go down.”

The answer is to create microgrid clusters, Ghosh says.

“Say you know you’re able to supply your microgrid with four generators, but for some reason—maintenance or failure—you lose one generator, you might have a shortfall of twenty or thirty kilowatts, and that’s enough for your microgrid to collapse,” he says.

“That’s when you need to ask your neighbour for help.”

If your microgrid is connected with a neighbour’s microgrid, you could fill your shortfall with their excess supply, but managing this sharing can become complicated, especially where grids are connected using a simple switch.

Ghosh’s simulations employed the more sophisticated option of connecting with a back-to-back converter.

This article was first published by ScienceNetwork WA on23 April 2016. Read the original article here.