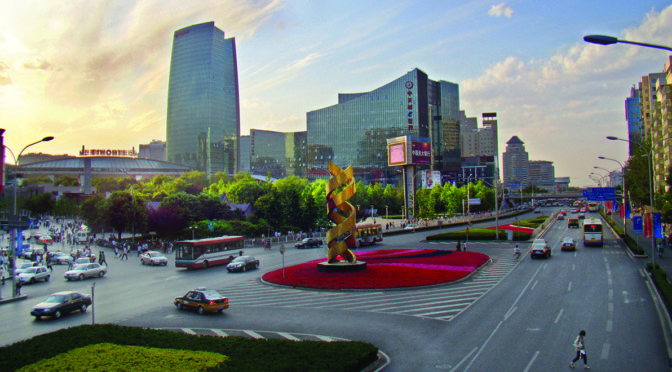 In a ceremony in Beijing’s Great Hall of the People in April 2016, Australian Prime Minister Malcolm Turnbull and China’s Premier Li Keqiang signed off on one of the most ambitious government-backed international research initiatives in recent history: the new Australian technology park.

For the first time, the China Torch Program will establish a science park outside China, on the UNSW campus in Sydney, giving Australia access to one of the world’s largest and most successful entrepreneurship programs. The program accelerates innovation by strategically locating Chinese businesses, universities and research organisations in science and technology.

Since 1988, 156 Torch Program high-tech zones and science parks, hosting over 50,000 companies, have been built across China. The Torch R&D budget is more than A$40 billion – and Torch companies account for more than 11% of China’s GDP. “Securing the Torch Project is an incredible recognition of how well UNSW is respected within China, based on our longstanding history,” says Mark Hoffman, Dean of Engineering at UNSW.

“It recognises that Australian technologies can play a significant role in industrial global development; and clearly China sees an opportunity that isn’t currently being exploited.”

Hoffman says the Torch concept has been very successful in producing the kinds of close relationships between industry and universities that lead to commercialisation.

“That’s a gap that Australia doesn’t exploit for a whole range of reasons, but a lot of Chinese industry does very well out of the university system within China. I think they’re seeing that Australia – particularly UNSW – presents considerable opportunity in that regard,” says Hoffman.

Australia lacks companies large enough to make significant investments in technologies, and has less industrial diversity, he says. This new Australian technology park could be a game-changer.

The UNSW Torch project started operating in August 2016, and between them, 20 companies have already committed over A$60 million to Phase One of the project. By 2020, a five-hectare precinct will be underway, with a focus on cutting-edge innovation and R&D in energy and environment, advanced materials and biotechnology. Deloitte Access Economics estimates Torch companies could return some A$1.1 billion to the Australian economy.

Hoffman says a Torch Precinct in Australia will mean significant funds flowing into the country to fund local research. “This is work that simply wouldn’t be funded otherwise,” he says. He dismisses concerns about potential missed opportunities for manufacturing in Australia, as unrealistic. “If manufacturers in Australia wanted to do this, they would be doing it,” he says. “Under Torch, Australia will certainly get returns for that research.”

He believes the Torch Precinct directly supports a key UNSW mission – great research. “And in a global environment, research only becomes great when it benefits society and the world.”

Hoffman’s involvement in Torch goes back a long way. In 2014, as Pro Vice-Chancellor Research, he led the first UNSW roadshow to visit Torch Parks and various companies in China, and began building those relationships. Two more roadshows and many subsequent researcher visits cultivated that initial seed, he says, as did long-term alumni relationships. UNSW has hosted students from China since the early 1950s.

“The work in photovoltaics has a very close link to our alumni group. Many of the significant Chinese solar cell manufacturing companies are UNSW alumni,” he says. “We’ve got Australian companies keen to be involved with this network because it provides them with important linkages to Chinese industry.”

Torch Project Manager Yuan Wang has a crucial role in developing the new Australian technology park. The senior chemical engineering academic has put most of her other work on hold to get the project up and running. “We’re all very excited about this. One of our first aims is to secure more than A$100 million in research funding from Chinese industry partners,” she says.

Phase One allows five years to secure that funding. During this period, a Torch Technology Business Incubator will be established on UNSW’s Randwick campus, housing up to 100 staff. UNSW has released about 1,000m2 of prime laboratory and office space on its Kensington campus in Sydney for the Torch Program.

A scheme to encourage student start-up businesses will also launch in Phase One. Supported by the Chinese and Australian governments, it will include large-scale student start-up competitions open to young Chinese entrepreneurs currently studying in Australia, and to young Australians seeking to export their ideas to China.

Phase Two involves building infrastructure – labs, offices, accommodation and recreational facilities – on a UNSW-affiliated five-hectare science park near the existing campus. Tus-Holdings, a Beijing-based science-park development company backed by Tsinghua University, is contracted to do a feasibility study for Phase Two, assessing proposed sites, and investigating Australian policy and projected investment returns, to ensure the university gets the maximum financial return on the Australian technology park.

The Phase Two site is expected to provide an Australian research and development base for up to 10 major Chinese companies, together with a Technology Business Incubator supporting up to a 100 Chinese and Australian small enterprises.

She already has around A$68 million in funds under ‘serious negotiation’, along with some A$26 million already committed. “It’s expanding more and more. We’re strong in manufacturing, ICT and social science, and there are more and more academics becoming involved, which is very promising,” says Wang.

“The main challenge is to find the most suitable partners in China, and align with the research strength at UNSW. Meanwhile, we’re just cracking on with our research, building partnerships, and getting some very initial-stage incubators on campus.”