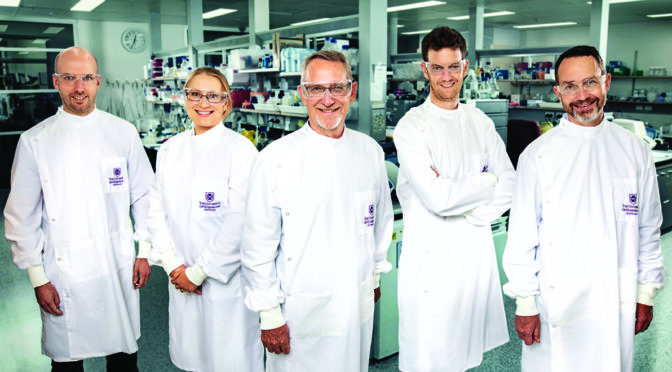 Australia’s long history of vaccine development earned us a position at the frontline in the race against COVID-19.

The expertise embedded in Australian university science ranges from complex modelling to trailblazing in genomic mapping, protein chemistry, bioinformatics and epidemiology. So when COVID-19 spread across the globe, Australian scientists were equipped to better understand not just this virus, but also how we can protect ourselves in the future.

At the request of the Coalition for Epidemic Preparedness Innovations (CEPI), University of Queensland (UQ) scientists were some of the early responders, developing a rapid-response vaccine pipeline to reduce vaccine development from multiple years to a number of weeks.

Their vaccine shortcut uses ‘molecular clamp’ technology to trigger an immune response, research patented by UniQuest, UQ’s technology transfer company, and quickly pivoted to target COVID-19. The team is supported by University of Melbourne scientists who are running independent tests on the impact of the antibody response on the virus in cell culture.

UQ has since partnered with global biotech company CSL to manufacture the vaccine, with Phase 1 safety trials being conducted in Brisbane from early July. If successful, vaccine production will be scaled up to an extraordinary 100 million doses towards the end of 2021.

“The partnership will enable the rapid development of the vaccine candidate through clinical trials, and by investing in large-scale manufacturing capacity now, we can reduce the time needed to deliver millions of doses of the UQ vaccine to those who need them most if it proves to be safe and effective,” says CEPI CEO Richard Hatchett.

A deep repository of knowledge

A deep repository of knowledge Australia’s long history in vaccine research and the size of our research workforce are key parts of our arsenal, says microbiologist Professor James Paton, Director of the Research Centre for Infectious Diseases at University of Adelaide, and whose grandfather, Sir John Burton Cleland, was Principal Bacteriologist at the NSW Department of Health during the 1918–19 pandemic.

“Think of the human papillomavirus vaccine, Gardasil, for example, and medical technology such as Cochlear and Resmed — that’s a record of which Australian science can be justifiably proud,” he says.

With colleague Dr Mohammed Alsharifi, Paton is working on a new combination vaccine designed to simultaneously combat two deadly respiratory diseases — influenza, caused by a virus, and pneumococcal disease, caused by a common bacterium. The combination formula would overcome the limitations of the existing vaccines used for both, and the pair hopes to be conducting human trials of the pneumococcal component within 12 months.

Paton points out that in both seasonal and pandemic respiratory disease contexts, people become far more vulnerable to additional infections. Pneumococcus often ‘hangs around’ in our nose and throat without a problem – when our immune system is hammered by another illness, it can cause life-threatening bacterial pneumonia and sepsis.

Paton says the advantage of doing science research in the university sector is the cross-fertilisation of ideas. “We have access to a wider range of facilities and a critical mass of people with expertise in different areas from our own,” he says.

As the vaccine race kicked off, university scientists were already working to understand the evolution of the new threat. University of Sydney’s Professor Edward Holmes is an evolutionary biologist and virologist who co-authored one of the earliest descriptions of the SARS-CoV-2 virus, published in February 2020 in Nature and The Lancet.

His colleague, Dr John-Sebastian Eden, says their team researches “all aspects of viral evolution in animals and humans, even in insects”. They scan pathology samples from animals using total RNA sequencing to reveal the full spectrum of microbes present, a technique called Metatranscriptomic Shotgun Sequencing.

“Sequencing doesn’t just target specific microbes; we can recover any virus or organism that’s present in the sample,” says Eden. “These powerful sequencing techniques were done on lung wash samples from some of the earliest COVID-19 patients in China.”

In this shotgun approach, all RNA sequences present in a sample are extracted and the fragments are reconstructed using powerful computers. The team then identifies the microbial life present by comparing these fragments to huge databases of known RNA, working with scientists at universities around the world to share their research via global genetic databases.

These hold billions of records of genetic sequences for organisms ranging from humans to bacteria, archaea and viruses – including more than 35,000 viral genomic sequences of the SARS-CoV-2 virus.

The unique facilities let scientists at Australian universities rapidly process data and keep tabs on the virus through molecular epidemiology, where samples of SARS-CoV-2 viral RNA from different patients are analysed and compared with others. That lets us track the virus’ spread in the community, and work out the country of origin for various instances of COVID-19 in Australia.

“These techniques are powerful,” says Eden. “We are also developing rapid turnaround for RNA sequencing so if an outbreak of a new disease of any kind happens, sometimes within hours, we can identify a novel organism.”

Modelling the spread of the virus

Mathematical biologist Professor James ​McCaw, from the University of Melbourne, is working with colleagues at the Doherty Institute on the modelling that guided the national cabinet to a solid public health response.

“We’ve been working for 15 years in this space to be ready for an event like this,” he says. “We provided advice to the government in mid-January, preparing scenarios of what could eventuate based on our epidemiological understanding at the time, before there were more than one or two cases in Australia and only a few hundred recorded in China.”

This modelling prompted early and decisive government action. “We’ve been prepared and the government took it seriously from the start,” he says.

“Our public health experts have been really astute, and our politicians are listening to them,” he says. Klinken says that crisis situations can be plagued by groupthink — where no-one queries ideas — but this has been avoided by using innovative panels with a cross-section of expertise.

“They have reached out to the university sector and brought in epidemiologists, alongside experts in the mathematical modelling of diseases, engineers and virologists, all advising on how to plan – and that’s been invaluable.”

McCaw says that unmanaged, the virus has a reproduction number (R0) around 2.5. Unchecked, it would have killed tens of thousands of Australians. “Through our public health response and the commitment of the Australian community, we avoided that disaster situation.”