Advances in the design and manufacture of polymer solar cells based on light harvesting dyes promise a solar power revolution. 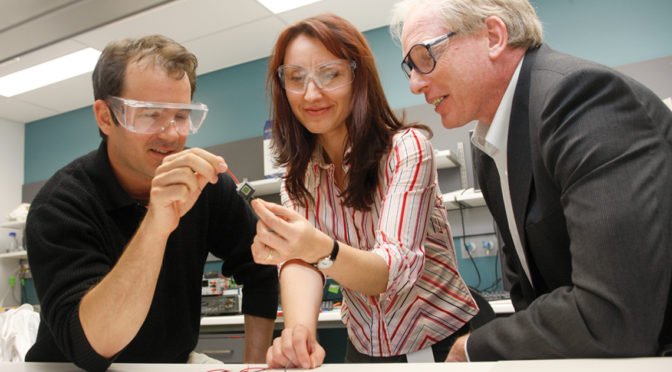 We can expect to be manufacturing and exporting cheap, lightweight solar cells (electrical devices that convert light energy into electricity) to the rest of the world by 2019, taking renewable energy to remote and off-grid communities such as emergency refugee camps.

This prediction came from Professor David Officer, head of the polymer solar cell program at the CRC for Polymers (CRC-P), which is developing design and manufacturing processes for commercially viable polymer solar cells based on a light-sensitive dye.

Officer described the cells as a “people’s technology” for the future. His optimism is based on patents recently secured by the CRC-P for components that will provide a competitive edge over other consortia developing similar cells. CEO Dr Ian Dagley said CRC-P researchers have also pioneered new cost-effective manufacturing techniques that, for commercial reasons, currently remain secret. 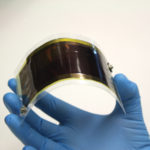 Polymer cells exploit the same photovoltaic principle as silicon- and glass-based rooftop solar panels. Unlike those bulky panels, however, polymer cells are flexible and lightweight and, as a result, can be incorporated onto a wide range of surfaces – from walls to sunshades. Transparent versions can even be used in windows. They can also operate indoors, enabling electricity recycling.

Crucially, however, polymer cells are considerably cheaper to manufacture. Silicon cells, for example, require expensive equipment and carefully controlled conditions, while the polymer product can be produced in minutes with minimal labour using reel-to-reel printers, presenting new opportunities for Australian manufacturing. Officer estimated that, using methods developed by the CRC-P, polymer cells can be produced that cost no more than 50 cents per watt – that’s less than half the price to which the silicon solar cell industry aspires.

Dye-sensitised solar cells first created much excitement when they were invented 23 years ago, but have failed to deliver commercially on their early promise. So far, only one company – Wales-based G24 Power – is manufacturing the cells, and only on a small scale.

A key obstacle has been the cost of materials. “We’ve been trying to develop a cost-effective solution to producing the solar cells using inexpensive materials, some of which we’ve made ourselves and can scale up quite easily,” explained Dagley.

The CRC has achieved its materials and fabrication advances through a collaboration of expertise across five partner institutions: the University of Wollongong – where Officer developed new techniques that synthesise cheap organic dyes – the Australian Nuclear Science and Technology Organisation and the Universities of Newcastle, Queensland and NSW.

The CRC-P is investigating opportunities with sufficiently large markets to make manufacturing the cells cost-effective, which Officer said has been another obstacle to commercialisation. One contender is in horticulture, where transparent cells incorporated into greenhouses could power cooling and water pumps. The cells may even be able to promote plant growth by transmitting only beneficial wavelengths of light.