Data sharing out of the blue

The marine economy is boosted by data from an army of robotic floats. 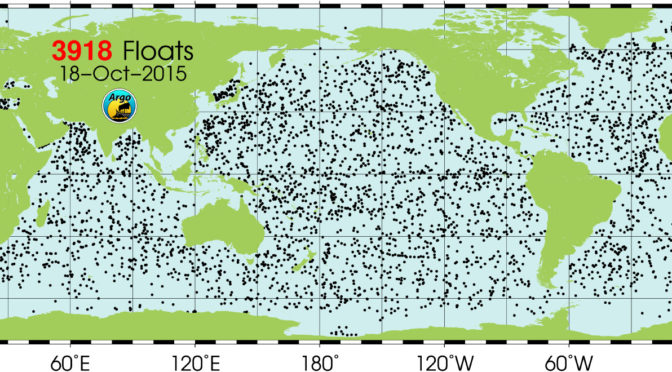 In Greek mythology, the Argo was a ship sailed by Jason and his Argonauts in their quest for the legendary Golden Fleece. Today, marine industries and modern-day sailors on a different kind of quest also make use of an Argo. For almost 15 years, the Argo international ocean-monitoring project has been collecting and data sharing climate and oceanography research through sensor-equipped floats.

“The Argo community has really led the way in creating a data sharing culture. By making data access free and open, it’s breaking down the silos once set up to collect and protect observations.”

“The Argo community has really led the way in creating a data sharing culture. By making data access free and open, it’s breaking down the silos once set up to collect and protect observations,” he says. BLUElink is an ocean forecasting system built on Argo data and the Ocean Forecasting Australia Model. CSIRO, the Bureau of Meteorology and the Royal Australian Navy collectively run the project, established in 2001. Forecasts are based on data including temperature, salinity, sea levels and currents, all measured in real-time at different locations and depths by the autonomous Argo floats.

In 2014, Oke and his colleagues used BLUElink to provide intelligence in the search for Malaysian Airlines Flight MH370, which vanished with 239 passengers on board.

“We dropped all tools in our support for the search. We made educated guesses about the splash points and used BLUElink to look at where the debris was most likely to go,” says Oke.

Then, in July this year, a wing part washed up on Réunion Island east of Madagascar. “We did historical runs to backtrack with BLUElink to see if the debris could be from the plane. Argo data was a key component.”

The current locations of over 3800 Argo floats appear on a map like confetti across the oceans. Each float’s sensors collect temperature and salinity data profiles at depths of up to 2000 m. Every 10 days the floats come to the surface to relay data to satellites. More than 10,000 profiles per month provide oceanographers, climate scientists and others with comprehensive subsurface ocean data, accessible via the IMOS (Integrated Marine Observing System) web portal. Since 1998, Argo data sharing has generated dynamic maps of ocean currents and resulted in over 2000 scientific research papers.

As for BLUElink, its users range from marine industries such as shipping companies to individuals like surfers and sailors. Each year, using forecasts from BLUElink, sailors in the famous Sydney to Hobart yacht race are briefed on the conditions they’ll encounter on some of the world’s roughest seas.

Oke is particularly excited that the field of operational oceanography, which aims to make ocean monitoring and prediction routine. He sees improved ocean forecasts resulting from the Global Ocean Data Assimilation Experiment (GODAE), which is exploring how BLUElink can be used more efficiently. Data from sensors on marine gliders closer to shore will also be integrated with Argo data sharing to create new coastal models.

“One day, thanks to Argo, we’ll see ocean forecasts as reliable as the weather forecasts that we check-in on every day,” Oke says.