In the dry heat of Mildura, an agricultural revolution is taking place as East African refugees share their skills with Australian researchers. 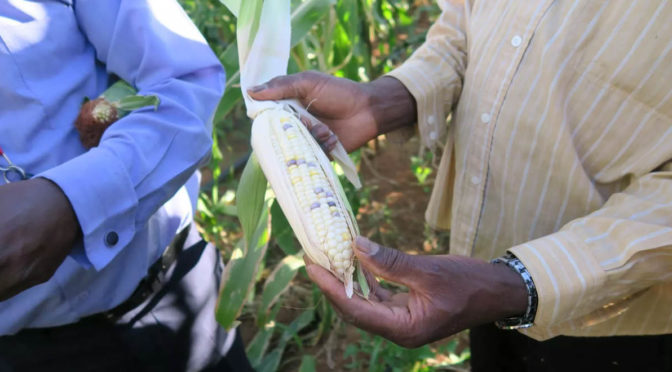 Far from their native home in eastern Africa, a group of former refugees have brought their traditional farming methods to their new home in Victoria’s north.

Armed with shovels and hoes and some seeds, Mildura’s Twitezimbere Burundian community have planted a crop of maize – a traditional staple food in their home country – which is not only connecting them to the greater Mildura community, but is also connecting researchers with new agricultural methods.

These methods, employed in the northern Victorian township that’s known for its hot temperatures and vast food-growing industry, are helping researchers from the University of Melbourne and the University of Wollongong understand new ways to grow and support crops beyond current techniques. This is especially important in an era of increasingly erratic weather patterns.

With funding from an Australian Research Council Discovery Project, the researchers are exploring how people from ethnically diverse backgrounds value nature, how they practise agriculture and how they transfer skills from their home country to the Australian landscape.

“One of the reasons we’re doing this is because when we talk about migrants in relation to the environment, they’re often portrayed as a drain – extra people needing resources. It’s a population debate that frames migrants very negatively,” says Dun.

“So, we wanted to challenge that: these are people with skills, and migrants are not often asked about their knowledge and skills relating to nature.”

One of the Burundian participants, Joel, said of why he wanted to farm: “I looked and saw [that] this town is a town of farmers. So I thought it will suit me. Because I did not study, I don’t have a degree, I don’t expect to go and work in an office”.

Another agricultural research participant, Joselyne, says she sees Mildura as a “place to grow”.

And grow it has. The tiny maize seeds were planted in September 2016 and by February 2017 had flourished into a soaring crop in which people could get lost. Dun says its success has delighted everyone involved, but especially the local Burundians.

The Republic of Burundi is an east African country that has been blighted by a recent history of colonisation and bloody civil wars. Unlike Australia, the majority of Burundi’s population live in rural areas, so farming and agriculture are significant economic and practical components of life in the land-locked country.

Maize is a staple food for Burundians, along with sweet potato, cassava and wheat.

“Joel, Joselyne and other members of the Burundian community are extremely accomplished and knowledgeable farmers,” says Dun. “Through their interactions with more established farmers in Mildura, this project provides really exciting opportunities to learn about their farming methods.

“It’s been built on such a strong foundation of mutual respect and a willingness to learn from other cultures, which has been inspiring to see,” adds Klocker.

The community will consume about 10% of the maize fresh, and the rest will either be sold or dried and milled into flour to make ugali – a traditional East African dish. The success of the crop has opened the path for them to think about developing their own small business, selling maize to the Mildura community.

“They feel proud and it’s connected them to the general Australian community in Mildura in a very positive way,” says Dun.

The agricultural research project has been a group effort, made possible thanks to the generous access to one acre of land provided by Sunraysia Produce, support from Sunraysia Local Food Future’s members and Food Next Door program, Sunraysia Mallee Ethnic Communities Council and Mildura Development Corporation.

Dun says keeping this farming tradition alive has been particularly good for the younger kids amongst Mildura’s Burundian community, many of whom have grown up in Australia and have now been able to interact with this crop and how their family farmed in Africa.

Thanks to the success of the agricultural research pilot, more businesses and community groups are seeking to get involved and cultivate more under-utilised land. Vietnamese, Tamil, Nepalese, Hazara and young Anglo-Australian groups across Mildura want to get involved in the next farming scheme, with talks underway to cultivate and establish a community farm on a recently-donated 20-acre parcel of land.

The Food Next Door program needs help kick-starting the community farm and is currently looking for support and financial donations. If you would like to help, please email sunraysialocalfoodfuture@gmail.com

This article was first published by Pursuit. Read the original article here.